“We met on the first day of Grade 3. My parents brought me to my new school, having just moved to Calgary from London, Ontario. I don’t remember much about that day except it was a big auditorium, or felt that way to an 8 yr old, and swarmimg with kids. Lots and lots of kids. I was glad my dad was there to take charge of things, something he seemed pretty good at. It was dad who spotted Judith, a wee sprite of a thing, sitting on a bench all alone. Who knew it was about to become a lifelong friendship. 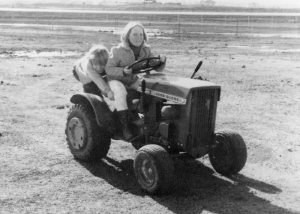 “We had just moved to a new neighborhood in Calgary. My mom had gone back to work and my father was looking for work, so I was sent across the field to register myself at the new school on the first day of grade 3. It seemed pretty scary, but I went to the “A’s to E’s” line and got the form I was supposed to fill out. I sat down on a bench and tried to fill it out. I was stumped by the spelling of my father’s middle name, Hayes, and spelled it “Haze”.  No doubt they figured we were Jimi Hendrix fans. After I handed in the form, I was told to wait again on the bench.  I sat watching people and noticed Merrill and Joyce Wattie. Both were wearing suits, unlike the other moms (there were no other dads). I assumed they were teachers.  At one point they kissed and I decided they were probably not teachers. Merrill sat beside me on the bench and asked me my name. I told him I was Judith. He asked me what grade I was going into and I said “grade 3”. He introduced me to the little girl sitting on his right as his daughter Alison, who was also going into grade 3. He directed me to shake her hand and be friends. I had to reach around his belly, to do so.  As soon as I grasped Alison’s hand, I felt safe.”

2 comments on “Me and Jude”

First it was Karma, now Chucho...something about Casa Tamarindo that invites these 4-legged souls to come on in 🐾🐾 For now he’s in the studio but once he feels a little better, we’ll introduce him to ‘the big dog’...hoping they’ll be pals #rescue #streetdog #whataface #iguesswewereready #wtf
I never thought a birthday in the time of Covid would be anything special, but then a friend came by with this ‘family portrait’ 🥰 Think he nailed Ric? 😂 You rock @fitz_de_merida @cmpliego This gem is going in my new studio! #friends #inthistogether #supportartists #buyart #makeart
Rainbow over La Ermita...rain gods passed us by this time 🙏🏻 #afternoonvignette #walkingthedog #outandabout #emptystreets #mibarrio #ermita #merida #rainyseason
💔🚫👨‍👩‍👧‍👦
Where is everyone? Even Iggy is getting a little fatigued by all the social isolation, and being a people dog, is not too impressed with this new normal 😔#quarantine #socialdistancing #isolation #mibarrio #streetlife #merida #morningvignette #untilwemeetagain
So happy my mom has two of her daughters living in the same little mountain town as she is, and am grateful for all their love and care of ‘the mama’. 💕#untilwemeetagain 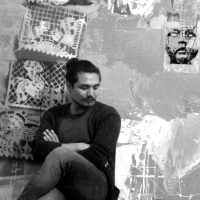