Ten years ago this month, I walked out the door of the Tom Baker Cancer Centre in Calgary, Alberta, my ‘good-to-go’ papers in hand and a newly minted batch of peach fuzz on my head. I remember it being a typical fall day in Alberta – bright, crisp, and full of promise.

It took me a while to embrace the promise of that day because cancer remained in my psychological self long after eradication from my physical one. Eventually I did, taking my second chance and running with it – all the way to Mexico. Some people thought it was kind of crazy, and some days my own untarnished optimism was pummelled into submission by the ever present Fear of the Unknown. However, after being released from treatment and falling right back into the status quo with frightening ease, I came to realize something. If my life was going to have more meaning for me, I had to become responsible for making it so. For me, that meant creating fundamental changes which would challenge me in new ways, creatively and emotionally. Finding fulfilment beyond my own normal meant following through on an oft imagined dream to live in another culture, where living with less didn’t have to mean living a less rewarding life.

Cancer was not a gift, but it was an opportunity to look at things differently. Moving to Mexico to embrace a culture as foreign to me as the language, became the catalyst for the change I’d hoped for. After five years, I’m still adjusting to this new life, but for the most part, the struggle is with an adversary more daunting than cancer – myself.

“Sorry”, Melva said, “that shouldn’t have hurt, but you’ve got the tiniest veins in your hands I’ve ever seen, and they’re not cooperating.”

I don’t know what Melva is talking about because I have my mother’s hands – large, sturdy and highly cooperative. My grandmother had English teacher hands – delicate, pale, and somewhat secretive. My hands are doing battle for me now, fighting back in a way I can’t, making it difficult for Melva to do her job. I’m not angry with Melva, I don’t have the energy. But I’m annoyed she seems so flippant, like she’s getting ready to jumpstart a car battery instead of a human body. My human body. Melva seems an okay person, but she’d be better suited to nursing animals than people. A dog on chemo wouldn’t care if Melva said, “The first time I rolled a chemotherapy bag down the hall to a patient, there was a leak in the bag and damned if it didn’t eat a trail right through the linoleum.”

Tossing the third ruined needle into the hazardous waste bin and snapping her gloves off with frightening efficiency, Melva strides off in search of a small vein expert, and I find myself alone. Melva has been a distraction. Her absence leaves me nothing to focus on except my surroundings, something I’ve been avoiding. I scan ‘the others’ with slightly downcast eyes and realize just how much I’ve been trying to make myself, and them, invisible. They reflect what I choose not to see – fear, weakness, resignation – and I prefer not to look in that particular mirror. I’d rather look at my hands; they haven’t lost their self-esteem. I squeeze them in tight fists, willing the veins to cooperate.

This story came to mind as I was writing. I send it out to all who have endured the Melva’s of the world, to those who have thrived and those who are still waging war with their bodies. And to my remaining Hope Sisters—Leslie, Sherry and Susan. 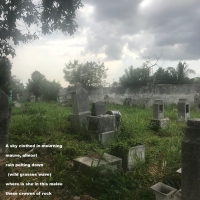