A tiny overhang gives no shelter from the sudden afternoon rain so common in Mérida. I pound on the wooden door and rattle the iron protector but the music inside drowns out any attempts to be heard. Just as I’m about to give up, the door swings open and a sharp scent of solvent and paint escapes to mingle with the wet pavement outside.

Sometimes when I enter the realm of an artist, I’m overcome by a sense of wonder—and incredulity. Wonder at what I’m about to discover and incredulity at the chaotic fusion of life meets art. The studio/home of Mexican painter Irvim Victoria is like the Yucatán rainforest that so inspires him, with art swallowing up everything in its path. The table is camouflaged by paint; a chair is re-purposed as a trellis for work clothes; a couch is smothered in canvasses.

“I just finished that series of landscapes”, Irvim says as I admire the pieces on the couch. “It was part of a grant program that I worked on for a year. I took my canvasses to places like Celestún and Sisal and worked on site. I then did another series, a more abstract interpretation of those paintings. Now I’m doing some drawing, and also collaborating with my friend and artist Juan Pablo on large pieces…I like to work big”, he smiles.

We make our way to the back of the studio, where artist Carlos Pliego is painting. This part of the studio is full of light, with ceilings tall enough to accommodate the large canvasses Irvim prefers. Pliego has his own studio but they get together a few times a week to hang out and paint.

Where did you two meet?

“We met at ESAY (Escuela Superior de Artes de Yucatán) here in Mérida, where we both studied painting,” Irvim answers first. “Ya, but I dropped out,” Pliego admits. “It wasn’t for me, much to my mothers disappointment. She thought I needed a piece of paper to be a painter but I knew that wasn’t true. So I worked hard and made many paintings that I sold in the streets and at my house.”

“I began painting on found wood because I had no money but slowly, with help from people like Gerardo Gamboa at Galería La Eskalera, I started to sell more of my work. From there, I was able to buy canvases and eventually found a studio I could live and work in.”

And what about you Irvim, what was your first ‘break’?

“Pliego,” Irvim says. “I was living in a tiny apartment near the market and had no room to paint. Pliego had just rented a big space with his girlfriend and asked if I wanted to share it with him, which of course I did. I was finishing a piece to enter in the Bienal de Yucatán when I met a couple from Santa Fe who came to see Pliego. They loved my painting and bought it.” He pauses for a moment before continuing. “The other important thing for me was being able to exhibit at the MACAY (Museo Fernando García Ponce) as a student. The MACAY has an important relationship with ESAY, that provides many of the students a chance to show their work in a professional manner. My work was very well received and I was grateful for that opportunity.

Irvim and Pliego have radically different painting styles but it’s clear they share a mutual respect for each other’s work. I ask them both what it is they admire most about the other as artists.

“I appreciate his loose and free strokes, his rawness,” Irvim says. “As a whole, Pliego’s paintings have a sense of wildness or freedom…”

“For me,” Pliego interrupts, “the act of putting paint on canvas is very physical and yet sometimes, it’s very tender and soft so I have to learn to control myself.” He pauses, as if weighing the seriousness of the question. “Irvim and I started working together theoretically, and then we got to a point where I would wait to see what he was doing. He’s like a scientist, always experimenting with things, and he inspires me…we have a reciprocity”, he adds, struggling with the word in English but I know exactly what he means.

This is the first time Irvim and Pliego will be taking part in the Artist Studio Tour here in Mérida, and since they’ll be collaborating, I ask if they might consider painting ‘live’ that day. “Absolutely,” Pliego grins, “painting is a party!”

Once again, the Merida English Library will host a one day open studio tour of over 25 national and international artists with studios in Merida. This self-guided Artist Studio Tour is a unique opportunity to meet and talk to the artists, and takes place on Saturday, February 18th, 2017. Visit the Merida English Library  for more information on the artists and details on the tour.

0 comments on “Meet the Artists: Irvim Victoria and CM Pliego” 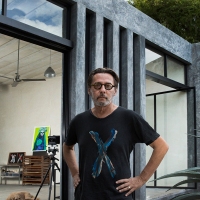 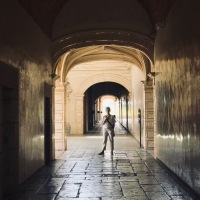